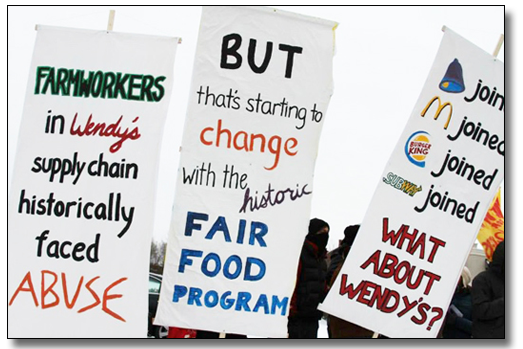 This coming March 2-12, farmworkers and thousands of consumer allies will be mobilizing to demand real, Worker-driven Social Responsibility from Wendy’s — the lone holdout among the big five fast-food companies of Yum Brands, McDonald’s, Burger King, Subway, and Wendy’s who has yet to join the award-winning Fair Food Program!

Despite the growing and undeniable success of the Fair Food Program, Wendy’s has, time and time again, turned its back on workers and consumers calling for the fast-food giant to join the FFP, ignoring their letters, phone calls and protests.  Likewise, Wendy’s has turned its back on the Florida tomato industry itself.  Inexplicably, just as the industry was being called “the best working environment in American agriculture” on the front page of the New York Times for its commitment to the human rights standards of the Fair Food Program, Wendy’s moved its substantial purchases of fresh tomatoes away from Florida in early 2015.  That’s right, they affirmatively decided to buy their tomatoes from farms offering workers fewer protections. 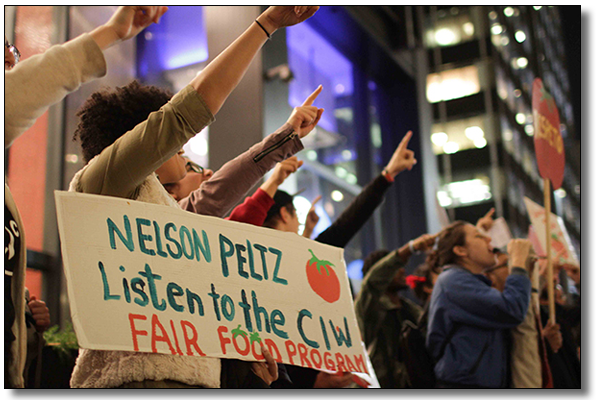 Most recently, Wendy’s released its own new Supplier Code of Conduct, spelling out standards on issues ranging from animal welfare to environmental ethics and human rights.  On the surface, the code appears to reflect a serious commitment to ethical supply chain management. On the surface…  Because when you dig beneath the surface, what you don’t see is any worker voice in developing Wendy’s human rights standards, much less in their enforcement (Make sure to read CIW’s response to Wendy’s Code of Conduct).

Drawing on the long history of CIW Truth Tours that paved the way for the award-winning Fair Food Program, the Workers’ Voice Tour will build on the three-year-old Wendy’s campaign, partnering with students and consumers across the country to amplify the call for farm labor justice.  The first stop on the tour will take place in the heart of New York City, at the sleek Park Avenue offices of Wendy’s Board Chairman Nelson Peltz.

From the Big Apple, farmworkers and their allies will bus westward to Columbus, Ohio, to join students for a massive mobilization at Ohio State University, and from there continue on to Louisville, Kentucky and Gainesville, Florida — all major hubs in the growing student-led boycott against the fast food giant.  Finally, the caravan will arrive in Palm Beach, Florida, for the tour’s big closing march in Mr. Peltz’s glitzy vacation hometown. 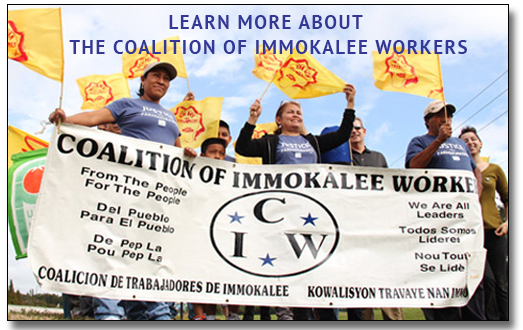 The Coalition of Immokalee Workers (CIW) is a worker-based human rights organization internationally recognized for its achievements in the fields of social responsibility, human trafficking, and gender-based violence at work.  Built on a foundation of farmworker community organizing starting in 1993, and reinforced with the creation of a national consumer network since 2000, CIW’s work has steadily grown over more than twenty years to encompass three broad and overlapping spheres:  The Fair Food Program, the Campaign for Fair Food, and the Anti-Slavery Campaign.  read more 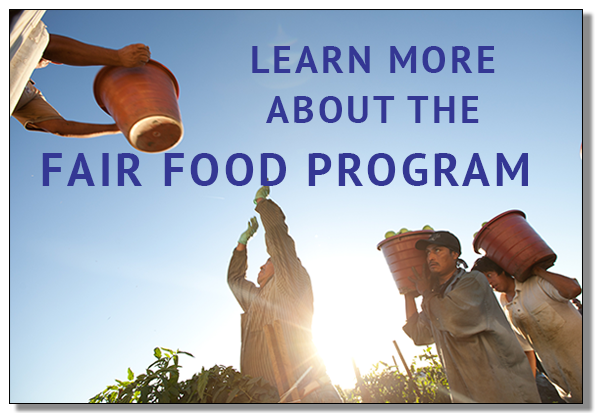 The CIW’S Fair Food Program is a unique partnership among farmers, farmworkers, and retail food companies that ensures humane wages and working conditions for the workers who pick fruits and vegetables on participating farms. It harnesses the power of consumer demand to give farmworkers a voice in the decisions that affect their lives, and to eliminate the longstanding abuses that have plagued agriculture for generations.

The Program has been called “the best workplace-monitoring program” in the US in the New York Times, and “one of the great human rights success stories of our day” in the Washington Post, and has won widespread recognition for its unique effectiveness from a broad spectrum of human rights observers, from the United Nations to the White House.  read more